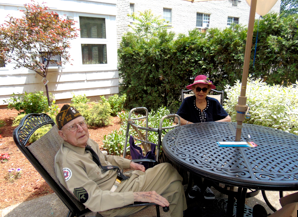 Sergeant T/4 George Martin, was drafted on April 11th, 1946, the last draft of WWII and also his birthday. When asked about his feelings at the time about being drafted, Mr. Martin quickly responded by saying “I was at ease about it. I felt it was my right to serve, especially after my brother serving before me and being a prisoner of was during the ‘Belgium Bulge’ war, I just felt like I had to.” While enlisted, George did his basic training in Alabama, where he recalls the weather being “very sloppy & muddy. I just rained a lot. Everyday almost.” Shortly after his training he began his tour to be stationed in Asmara, Eritrea (East Africa), took him and his troop six weeks to get to their destination. George and his wife Mary Martin smile as they tell the story of how it took him 6 weeks to get there, Sergeant Martin just shook his head as he reminisced and said “most dreadful six weeks of my life.” During his time in East Africa George camped out 30 miles into the desert and 2 miles deep underground, covered by sand (a commonly used tactic to hide from war planes). Mr. Martin was a radio correspondent during the war. Like many other members of the military George would by his carton of cigarettes, the only difference was, George didn’t buy them to smoke them. Instead, Mr. Martin would buy these cigarettes, .40 cents a carton and sell forward for about $20 a carton and taking the profits to help support the family “house-boy, Tasfu” by giving him the money or buying him clothes/food. George explains, “I never saw color, I just understood right from wrong, fair and unjust.”

Mr. Martin & his wife are currently long-term residents at Sprain Brook Manor Rehab, where the say often, “we love it here.”